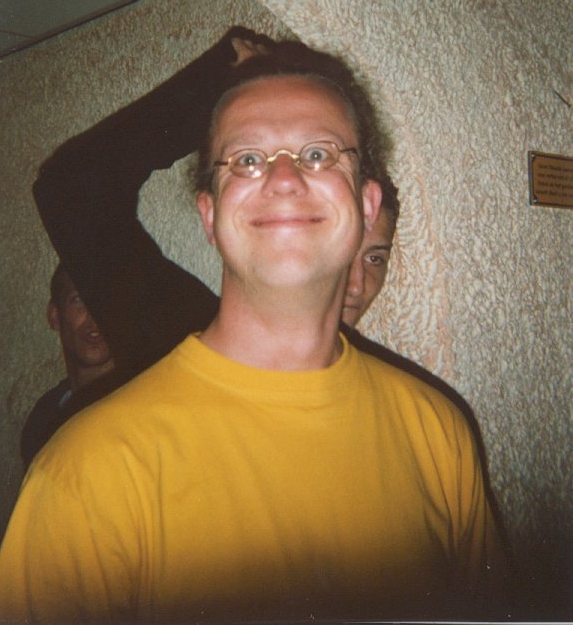 The initial few members of Clan [dp] have good memories of how exactly the now omnipotent group of bikkels came to be. Allow me to introduce you to Arean Verbrugge, the awesome physics teacher of Punaxe, Ragnarok, Nidhögg, Isidor and Elmort. It was during his classes that we didn't do anything but plot our now-evident world domination, as only then we actually had pen and paper ready (as opposed to during lunch breaks, when we were of course also plotting world domination, but couldn't be bothered to write it down).

Most of these classes were filled by things as drawing new maps, rehearsing all maps in dwango5.wad (can you name all on the picture?) and the music for all DOOM 2 maps, but one day we had a brilliant moment coming from the very core of inspiration - we realized everything bikkel starts with a P or a D. We used the one time we got expelled from class to dig through the complete three-piece dictionary to verify this theory and finalize the list of words - and behold. Our masterpiece was done and now that we had two letters, 'twas only a small step towards a tag for the clan we had already been contemplating to bring forth.

But in what order were we to use them? As pronunciation and typography combined with the names Punaxe and Ragnarok was better in the order DP, this became it. At the right is a picture of a possible logo for "PD", where Punaxe forgot that the small letter 'd' has the bubble on the other side.
Next was to focus on meanings - of which a satisfying amount of bikkel ones were available, as you know. The online version of shown historically valuable page is updated still today!

The clan grew quickly as we forced our friends to join us and before long we were the greatest powerhouse csDoom had ever seen!

- Believed to be the first sketch of the official [dp] logo (eyes and tail added later).

- An example of correct consumption of the three P's, Pomelo, Pizza and Pringles, a guideline made for Pun's and Rag's combined birthday party. Note the presence of another few P's: presents, (motion) picture, penis, pizza and pool.

- Expression of friendship has a long history in [dp]. Whenever two or more of us had something, anything in common, they would call each other "vriend" (friend). The exact pronunciation has known many forms over time, the present final stage being "ami" or simply "'mi". This is significantly shorter than the original "hhhVRIEHND", which saves energy.
The icon we use to indicate friendlies and the relic resemble the particular gesture that was originally made during the expression.

- Timothy was originally against DOOM for the default arguments: graphics, no true 3D, no overlapping floors, blah blah. It cost us quite some effort to finally make him play (which started with a merciless beating in map01 by Punaxe). When word of DOOM 3 got out, Timothy showed enthusiasm for it - even before having tried the original. This relic shows what we would have done to him if he played DOOM 3 without acknowledging its awesome predecessors.