Our mighty leader told me to write something about the FinLAN that happened at our place 17-19.7.08 so heres my input:

The LAN was held at our home in Koivukylä Vantaa, I had packed my stuff already on thursday and set up my computer the same night. We had to go shopping for few extra cables and bigger dsl box with 8 ports . On Friday Tuomio and I headed to Kotka to pick up JackInTheBox and Punaxe. It was kinda longish drive from our place and ofc i failed to read the map right so I drove in the wrong direction for like 40km :lol: Thank your god Tuomio had GPS in his phone. I drove like a madman and it didn't take long to get at at jack's place. It probably looks quite modest from outside. But inside it was like a huge maze with bronze statues and to get to jack's room you have to go through a maze in the basement. There were also some mummies upstairs who offered us cake!

We drove back and went shopping in Koivukylä! Punaxe _needed_ to find some chocolate peanut butter or something.. "shit on a bread" as we call it in here. When we were done we picked up Atomi from Koivukylä's trainstation. He was carrying a bag sized of a sumo wrestler where he had his computer and loads of tuna, and he didn't even break a sweat! We finally arrived at our place and started setting up computers and millions of wires, Jacki could have chosen any place in our house but she decided to choose a spot as close to me as possible!
aww^__^ 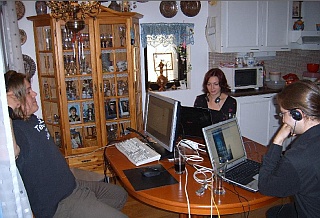 vv arrived later that day and set up his hardware at the kitchen table, where me, jack and pun already were. Atomi insisted he'd stay at the low living room table. I said it's not gonna be the best place to play, obviously, but later it came clear to us why he chose that spot.. cause most the time he was lying on his back, eating chocolate and watching Stargĺte SG1! :D 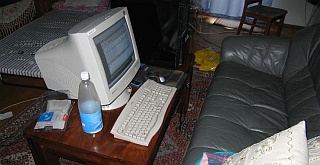 Ocelot was the last one to arrive and he set up his stuff at the last table available in our livingroom.

We played some 3vs3 and 5vs5 ctf. (I totally pwned Chewy in map08 sry m8, but doubt you'll read this :p). And ofc we played some duels. Ocelot kicked most ass, as expected, but I managed to grab one map01 victory from him! (now waiting hate mail from him :lol: )
Oh yeah and Tuomio set up his pc in the living room too, forgot about him :roll:

Saturday we played moar and moar, until the point when we got bored of zdaemon and played a starcraft ffa with me,tuomio,vv and punaxe! Good game! We also had delicious kebab that day. Yummy Ocelot doesn't look so happy there but once he got to finish jack's food too he had a smile on his face.

We had few funny moments at the lan, when jack came out from the toilet right after vv had took a huge dump in there.. she looked like @__@ GAAH AIR but tried to act normal as vv was sitting next to him :lol:

Guess that's most of it, on sunday me and oce walked jack and pun to the trainstation and said goodbyes, few duels happened after jack and pun had left but nothing too interesting i guess.

Once upon a time there was this glorious plan for a Finnish lan at Tuomio's & turSKA's place. Finally in 2008 the opportunity presented itself. Even Jacky and Punaxe left their mansion at a faraway land to make a long trip to the civilized world. A moment later we picked VV from a trainstation. As you probably know, vv loves live-action-role-plays so he insisted on bringing some equipment with him. Finally, Oce arrived at late hours.

Things went pretty much as one could suspect. Oce and was having fun beating people as usual whereas I was getting asskicked by everyone because my table was way too low. Oce also utilized some secret training methods but unfortunately all the pics have been burned on his request. Tuomio's prowess in ctf was something that intrigued everybody while Jacky and punaxe played WOW and similar stuff (as usual?). 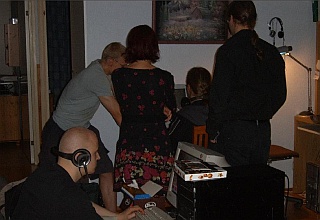 Next day we had dinner in a local five-star restaurant. Following turSKA's example, everyone ordered a kebab (except me). After thwarting UFOs from abducting jacky, oce gave his help to finish her meal which was way too big for ladies anyway.

When people started packing on the last day I took some official pics. Unfortunately Pun and Jack were already leaving and I realized I had no picture of Punaxe. I was able to correct the situtation at the last possible moment. As im writing this entirely truthful story I hope we'll all see again next year!