Technically, Punaxe had already met Jack once before, summer 2004 when Jack happened to be in the area visiting her former DOOMer boyfriend (yes, this appears to be a significant feature). However, it was only for a few hours and not quite as interesting as the moment(s) one year later, when I went to Finland to stay at her place for 10 days. 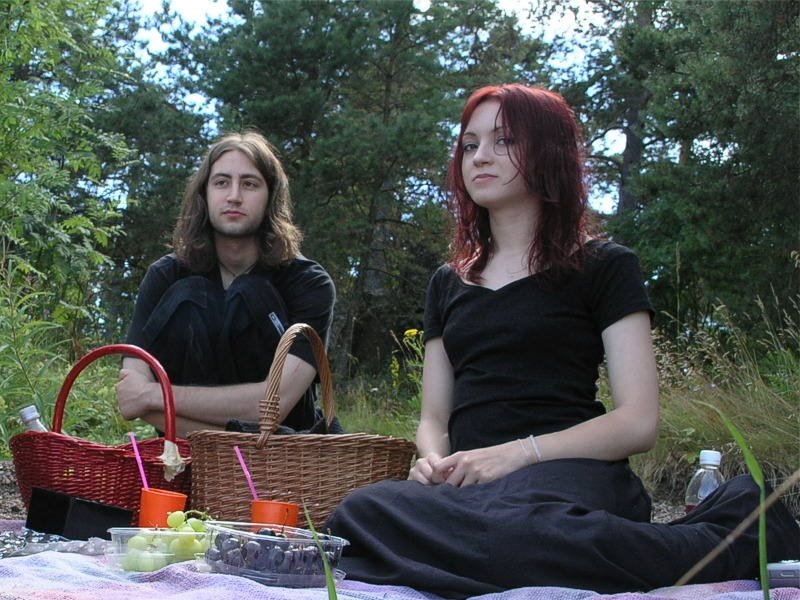 't Was then that we spent some more quality time like picnicking, playing DOOM, enjoying Finnish culture, playing CTF, going to festivals, playing ZDaemon, wandering around in the nature, playing cooperative, taking pictures and fragging each other.
Having already known each other for years and shared many sprites, sweat and tears there had long been some sort of attraction. It was however not until one of those quality nights that Punaxe finally saw the light and found his destiny. \o/

- On the 7th of August, the relationship officially began.
- Because Ragnarok forced him to, Punaxe had brought some kilos of Fanta Pomelo for Jack to drink as the northern heretics do not seem to have it themselves. Her opinion does not need to be stated as it could have been only one, seeing she is still in [dp].
- Jack has been taught the

't Was also a good opportunity to meet Mephisto, because Punaxe had planned to visit a friend in Estonia anyway, where du Meph lives. After deranging him with false instructions...

<Meph> i also got kinda confused because i saw this redhaired not blonde woman like you said talking to you, and then i wondered if it was really you and got nervous of making myself look stupid by going "punaxe!" on a total fucking stranger

...we shook hands and said kbye again. I remember me and the redhaired not blonde woman waiting for a tram not too long after that, and all of a sudden Meph came running towards us again. No clue what he was doing before that, but he figured he could take the same tram as us. And so we did. Forced smalltalk pursued.

So it wasn't very spectacular, but still I appreciate that you have come to see me for that short time. Thanks :)

<Punaxe> but damn did that tallinn look like a shithole
<Meph> :(