(Unfortunately we don't have any pictures of this moment, as Punaxe forgot to save them or something, and Nid's and Rag's harddiscs crashed.)

It was somewhere in December ’04 when we decided to celebrate new year's eve in [dp]style. That’s when we started making preparations for t3h evening. All of us would make and/or bring something to eat to Pwnaxe’s house, where we would spend the evening. So we paused Doom for a few minutes (sometimes sacrifices have to made, that’s life) and dragged our asses to the kitchen. Also Jemek just got his driving license and drove us with all our stuff towards Pun’s place and on the way we rented the movie Godsend to watch later.

Around 7 p.m. we all gathered at Pun’s and ate our delicious homemade pizzas, quiches, appelflappen, wafels and oliebollen, shit was all good with Punaxe, Ragnarok, Jemek, Elmort, Isidor et moi, Nidhögg. We watched that movie that turned out to be fucking lame in the end, tried to play some N64 for oldskool times (though we didn't manage to connect it due to some technical difficulties - Pun’s 1970’s TV didn’t have the right plugs) and started with Trivial Pursuit. 'Cuz we are so intelligent *cough* the questions were quite easy, and we didn’t finish the game before midnight because of the stiff competition.

12 O’clock: time to bring out the bad boys! After wishing everybody even more luck and pwning for the next year we brought out our fireworks (compared to which the BFG is nóthing).
At the time our hands almost froze off and we ran 'out of ammo' so we got our bikes and headed for the city, being delayed 15 minutes because of some huge-ass students' illegal fireworks showoff in their underpants in the middle of street. Finally we went to a club called Gonzo (cheap tickets, bikkel music, and hot chicks, kno'wha'mean Rag ;)). 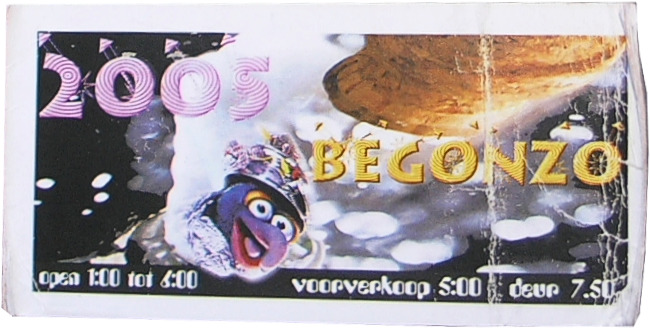 We all got beers and 'boswandeling' (some weird green alcoholic drink, the only one Punaxe seems to like :P) and partied like it was 1999. On the dance floor we were all making sweet moves, you should've seen the look on their faces, but hey, we're used to all that female attention. After a while we decided it was time to go back and finish our game of trivial pursuit. Then Isidor got held up by this 24-year old girl who gave him his number; yup he's got his way with t3h ladies. Isidor ftw!

Back at Pun’s place, should have been around 6 a.m., we finished our board game, having had to wake up Jemek a couple of times, because he kept falling asleep when we where reading him questions. After this we all got our bikes, thanked Punaxe, left him with all the leftovers and shit and cycled home to continue playing Doom again. To a good next year!